A Poem on Prophet Muhammad (s.a.a.w.) by Allama Iqbal

He slept on a mat of rushes,

But the crown of Chosroes lay beneath the feet of his followers;

He chose the nightly solitude of Mount Hira,

And founded a nation, law and government;

He passed his nights with sleepless eyes,

In the hour of battle, iron was melted by the flash of his sword.

At prayer time, tears fell like drops of rain from his eyes.

In his prayer for Divine help, his Amen’ was a sword,

Which extirpated the lineage of kings.

He inaugurated a new Order in the world,

He brought the empires old to an end:

In his sight the high and the low were one,

He sat with the slave at table one;

He burnt clear the distinctions of birth and clan.

His fire consumed all this trash and bran.

| nickname = The spiritual Town of Ghazipur

Kamsar-o-bar is refered to a group of villages in Ghazipur.

These villages are mainly situated near the bank of karamnasa river(Ganga).The main shopping of kamsar-o-bar happenes in Dildarnagar,a place situated in the middle of all these villages.The most common mode of transport for all the people to come to dildarnagar is our very own DMU of railways.It stops at every halt and sometimes even in the fields for people to get on it.

[[Category:Cities and towns in Ghazipur district]]

'''Dildarnagar ''' is a town and a [[nagar panchayat]] in [[Ghazipur district]]  of [[Uttar Pradesh]], [[India]]. It is 70 km away from [[Varanasi]] and 20 km from [[Ghazipur]]. Dildarnagar is most famous for its railway yard and its railway colonies. There are about 5 railway colonies. Dildarnagar Railway Division belongs to East Central Railway (ECR) Zone of the Indian Railway. About 125+ passenger trains pass from Dildarnagar Junction. The Divisional Rail Manager (DRM) office of Dildarnagar Division is situated here. At Dildarnagar Junction,  Main Line (delhi-howara)) .it is an important railway junction of the Indian Railways. Once, it enjoyed the position of the railway marshalling yard of uttar pradesh. The Grand Chord section, which starts from delhi, new delhi, via Dildarnagar ,patna and kolkata.

Over the years the city has been subjected to severe electricity shortage owing allegedly to inefficiency and corruption prevalent in the electricity department of the city.

it is regarded as a holy town by the more places like ghazipur,zamania,phooli,gahamar,bhadaura,mircha,rakasaha,usia,kurra,devaitha,etc.

people who came from other place joy and great joy in dashehara festival,diwali,holi,id,bakarid,etc.

Dildarnagar  is most and great favourate place situated between varanasi and patna.

it is one of the oldest continious inhibited town in the uttar pradesh and probably the oldest in ghazipur.

The town is a major market place for surrounding villages. It is situated near the border of neighboring state of Bihar. There are number of trains which pass through Dildarnagar Railway Junction connecting the town to other cities of the country. Usia Khas and Sarahula are nearby railway stations to Dildarnagar Jn, while Mughal Sarai Jn serves to be nearby major railhead to it.

There are several places of interest which can be easily accessible from Dildarnagar.  Sasaram, Sarnath, Rohtasgarh Fort, Varanasi and Jaunpur are some of them. Dildarnagar Railway Junction is served with many trains connecting the town to other cities of the country. Seemanchal Exp (Jogbani (BH)-Delhi), Shramjevi Exp (Delhi-Rajgir), Vibhuti Exp (Howrah-Allahabad), Magadh Exp-Islampur(BH) and Amritsar Exp (Howrah-Amritsar) are some of the trains that pass through Dildarnagar Railway Junction. Besides, several highways connect the town to other parts of Uttar Pradesh and neighboring state of Bihar. Varanasi Airport serves to be the closest airbase to Dildarnagar.

<!-- The section should provide data only from the Dildarnagar area. Not of the entire NCT. -->

1-The Name Dildarnagar was established since 1857.

2-In 1880 the Ghazpurahiya train was started from Dildarnagar To Tarighat.

4-Mohammad Syed Khan had always tried uplifting the educational standard of Kamsar-O-Bar throughout his life.

===History Of A British Officer===

Mirza Dildar Baig was an officer in the British Indian Army in 1857. He participated in the Indian Rebellion of 1857 in Jhelum a city in a part of Punjab which is now in Pakistan. He was arrested and hanged.

Mirza Dildar Baig is also known as Khaki Shah. He was stationed in the Jhelum cantonment in 1857 and was the commander in charge of three pack of the regiment HMXXIV consisting of around 600 soldiers.

With the arrival of news of mutiny in the army, he along with a large group revolted and killed 35 British soldiers on July 7, 1857.

The names of these 35 soldiers are on a lectern present in the St. John's Church Jhelum.

In this battle a British gunner William Connolly won a Victoria Cross.

His attempt failed and he was arrested and hanged at the age of 35. His grave is a shrine in Jhelum.Dildarnagar,a small town in Uttar Pradesh is also named after the martyr.

Mirza Dildar Baig was the son of Mirza Daler Baig and the grandson of Mirza Akmanullah Baig who was a descendant of Abu Taimur.

===History Of A Actor From Dildarnagar===

Nazir Hussain was concerned with the Indian film and multimedia.He was born on May 15, 1922 in Usian village(Dildarnagar) Uttar Pradesh's Ghazipur district.he is considered as the Pitamah of Bhojpuri cinema. , famous character hero at his time. He was earlier associated with the Azad Hind Fauz set up by Subhas Chandra Bose. He established the "Kamsaar Film" , under the banner of which many hit films in Bhojpuri were produced. He always gave priority to Bhojpuri culture of the district in his film.His nephew Mr. Tahir Hussain is at moment noted film Director and Producer.

While Hussain was busy in the Bombay film industry a meeting with President Rajendra Prasad changed the course of his life. At an awards function, Hussain was introduced to Prasad and after knowing that he hailed from Dildarnagar Ghazipur started speaking in Bhojpuri.

Prasad told Hussain to consider making Bhojpuri films which resulted in the super hit 'Ganga Maiya Tohe Piyari Chadhaibo'. Hussain wrote the script for the movie that became a raging hit. The songs were super hit and Hussain himself went on to produce and direct several Bhojpuri films in the 60s and 70s. One of his films Balam Pardesia is considered a landmark in the Bhojpuri film industry. Unlike the Bhojpuri films of today, the films made by Nazir Hussain (and others) revolved around social issues. They tackled the problems of dowry and landless farmers, highlighting the wickedness of cruel zamindars and capitalists.

<!-- The section should provide data only from the New Delhi area under NDMC. Not of the entire NCT. -->

Urdu,Hindi and Bhojpuri are the main spoken languages in Dildarnagar.

Other events such as Kite Flying Festival, ''[[Vasant Panchami]]'' (the Spring Festival) are held every year in Dildarnagar.

<!-- The section should provide data only from the Dildarnagar area. Not of the entire. -->

[[Category:Cities and towns in Ghazipur district]]

More than 200 passengers of the Howrah-bound Toofan Express had a miraculous escape when five coaches of the train were gutted in a major fire near here this morning, a senior railway official said. 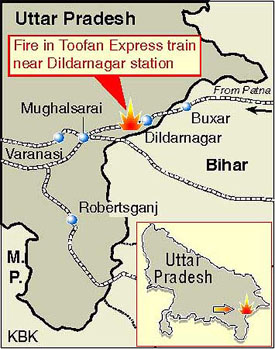 The train was between Darauli and Dildarnagar stations of the east central railway at about 7.30 am. when the fire broke out in one of the three-tier sleeper coaches, Mughalsarai Divisional Railway Manager Vijay Mohan said.

The blaze, which could have been caused by a spark from the stove of a tea vendor, soon engulfed four other coaches, including a first class one, gutting all five coaches before fire tenders arrived, he said.

All burnt coaches of the train were removed from the main line and stationed at spare tracks at Dildarnagar and Darauli stations, the DRM said.

The blaze was noticed by the driver of a goods train and he alerted the Toofan Mail driver who applied emergency brakes, he said.

The burnt out compartments of the Howrah-bound Toofan Express stands sill near Dildarnagar on Monday. — PTI photoAn inquiry has been ordered into the incident, he said, adding that senior railway officials from both Gaya and Mughalsarai and a team of doctors along with relief van have arrived at the accident site to supervise the relief and rescue operations.

The traffic on the Patna-Mughalsarai main line section has been disrupted with many trains being stopped at various stations between Patna and Dildarnagar, Mohan said.

The track is likely to be cleared by this evening after clearance of safety by senior officials, he said, adding that the Maghadh Express, the Brahmputra Mail and the Varanasi-Sealdah Express had been diverted via Gaya-Patna sections. 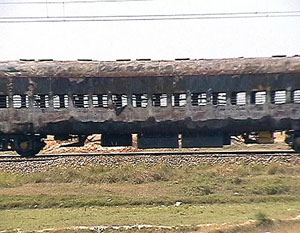 PATNA: Railway Minister Laloo Prasad ordered an inquiry into the fire which damaged three coaches of the Udayan Abha Toofan Express on Monday near Darauli station on the Mughalsarai-Buxar section under Danapur division of East Central Railway (ECR).

Train services were disrupted in the main line owing to the accident. A number of long distance trains were stranded at Mughalsarai and Buxar stations as work was on at the accident site between Darauli and Dildarnagar to restore railway link, ECR sources said.

No casualty or injury to anyone was reported in the fire which was doused with the help of fire tenders , the sources claimed.

The Commissioner of Railway Safety, Eastern Region, will hold statutory inquiry into the cause of the fire, the sources added. — PTI, UNI